Lymphoma is the most common type of blood cancer.  Specifically, lymphoma is a cancer that affects lymphocytes, which are a type of white blood cell. Lymphocytes travel through the blood and lymphatic system to defend the body against foreign invaders like bacteria and viruses.  Lymphomas usually develop when a change, or mutation, occurs within a lymphocyte, causing the abnormal cell to replicate faster than, or live longer than, a normal lymphocyte.  Like normal lymphocytes, cancerous lymphocytes can travel through the blood and lymphatic system and spread and grow in many parts of the body, including the lymph nodes, spleen, bone marrow, and other organs.

Three major categories of cancers that affect lymphocytes are:

Hodgkin Lymphoma (HL): There are five types of HL, an uncommon form of lymphoma that involves the Reed-Sternberg cells. Approximately 9,000 people are diagnosed with HL in the United States each year.

Non-Hodgkin Lymphoma (NHL): There are more than 90 types of NHL, some of which are more common than others. Any lymphoma that does not involve Reed-Sternberg cells is classified as non-Hodgkin lymphoma. Approximately 80,000 people are diagnosed with NHL each year in the United States.

Chronic Lymphocytic Leukemia/Small Lymphocytic Lymphoma (CLL/SLL):  Chronic lymphocytic leukemia (CLL) and small lymphocytic lymphoma (SLL) are forms of non-Hodgkin lymphoma (NHL) that arise from B lymphocytes.  CLL/SLL are the same disease with slightly different manifestations. Where the cancerous cells gather determines whether it is called CLL or SLL. Leukemic cells develop because of a change that takes place in the cell’s DNA. Approximately 19,000 people are diagnosed with CLL/SLL in the United States each year.

According to the Lymphoma Research Foundation, more than 100,000 people are diagnosed with lymphoma each year and there are nearly one million in the U.S. living with, or in remission from, lymphoma.  Overall, non-Hodgkin's lymphoma is the fifth most common cancer affecting adults in the United States. Hodgkin's lymphoma (HL), also known as Hodgkin's disease, represents about 10 percent of all lymphomas.

According to American Cancer Society statistics, approximately 8,830 new cases of HL will be diagnosed in the United States in 2021, and 960 people will die of the disease.  Non-Hodgkin's lymphoma is much more prevalent, with an estimated 81,560 new cases and 20,720 deaths in 2021.

Treatment options for lymphoma include chemotherapy and radiation therapy. Effective treatment depends on an accurate assessment of the location and extent of disease at the time of diagnosis, as well as how the patient responds to treatment.

Molecular imaging has become an essential tool in the diagnosis, evaluation and treatment of patients with lymphoma.

What is molecular imaging and how does it help people with lymphoma?

What molecular imaging technologies are used for lymphoma?

Non-Hodgkin’s lymphoma patients who do not respond to chemotherapy may undergo radioimmunotherapy (RIT).

How is PET used for lymphoma?

Physicians use PET-CT studies to:

What are the advantages of PET for people with lymphoma?

For the diagnosis and treatment of lymphoma, PET-CT scans: 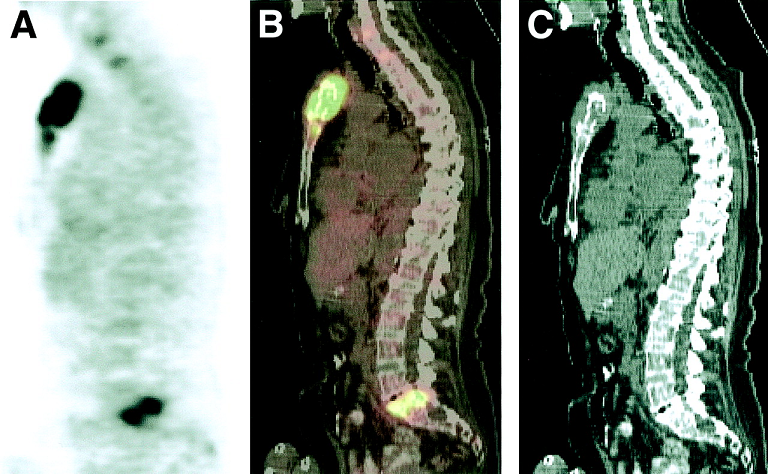 What is radioimmunotherapy (RIT)?

In a healthy immune system, certain white cells are able to recognize invading organisms such as bacteria and viruses. The white cell secretes a protein substance called an antibody that identifies a feature of the foreign cell called an antigen. The antibody coats the invading cell, which enables other white cells to destroy it.

In immunotherapy, scientists create monoclonal antibodies in a laboratory that are designed to recognize and bind to the antigen of a specific cancer cell. In RIT, the monoclonal antibody is paired with a radioactive material. When injected into the patient’s bloodstream, the antibody travels to and binds to the cancer cells, allowing a high dose of radiation to be delivered directly to the tumor.

Several new radioimmunotherapy agents are under development or in clinical trials.

What is the future of molecular imaging and lymphoma?

In addition to increasing our understanding of the underlying causes of disease, molecular imaging is improving the way disease is detected and treated. Molecular imaging technologies are also playing an important role in the development of:

In the future, molecular imaging will include an increased use of: