Breast cancer occurs when certain cells within the breast grow in an uncontrolled, abnormal, manner. Breast cancer forms in the ducts and tubes that carry milk to the nipple, and lobules, the glands that make milk. It occurs in both men and women, although male breast cancer is rare.

According to estimates by the American Cancer Society, more than 276,000 people in the United States will be diagnosed with breast cancer and nearly 42,000 people will die from the disease in 2020. Accurately pinpointing the location of the primary tumor(s) and determining whether the cancer has spread to other parts of the body are critical for determining treatment options for people with breast cancer.

Physicians are using molecular imaging to determine the aggressiveness of breast disease, to select a course of therapy and to assess its effectiveness sometimes after just one cycle of treatment—and to eliminate unnecessary surgeries after treatment by distinguishing active tumors from residual masses. Molecular imaging is also used to minimize the number of axillary lymph nodes removed by determining which nodes are most likely to contain cancer cells.

The molecular imaging technologies currently being used for breast cancer include:

How is PET used for breast cancer?

Physicians use PET-CT studies to:

PET helps physicians and their patients: 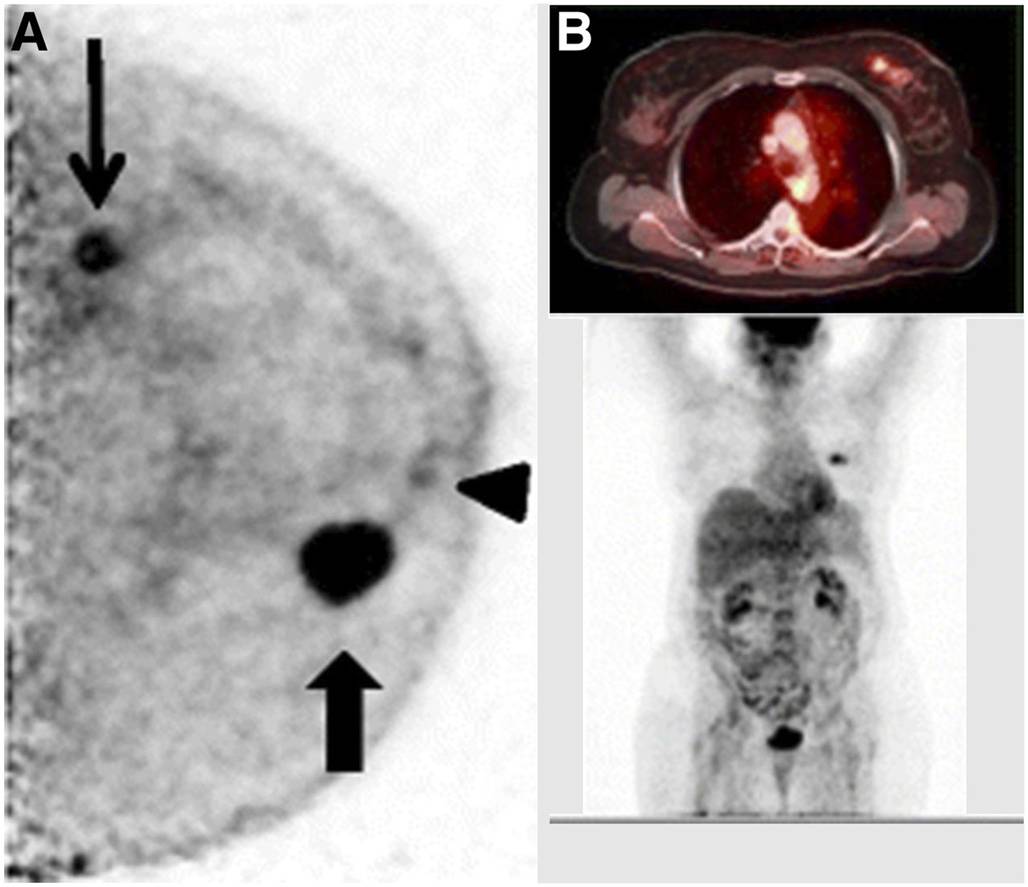 What is a sentinel node biopsy?

A sentinel node biopsy is an established alternative to axillary lymph node dissection. Molecular imaging is used to identify the first few, or sentinel, nodes into which a tumor drains. Sentinel nodes collect the fluid draining from the tumor and are most likely to contain cancer cells if the tumor has metastasized, or spread. In a sentinel node biopsy, only the sentinel nodes are surgically removed, which results in fewer complications and side effects for the patient, including lymphedema.

Prior to surgery to remove part of or the entire breast, a tiny amount of radioactive particles are injected in the area of the breast where the tumor is or around the nipple. Images may be taken to help the surgeon visualize the radiotracer’s pathway as it leaves the breast. The surgeon makes an incision underneath the arm and passes a hand-held probe over the area to measure levels of radioactivity. Only the lymph nodes that have absorbed the radiotracer are removed. In less than five percent of sentinel node biopsies, the sentinel node cannot be identified and a full axillary dissection is done.

A sentinel lymph node biopsy is:

Breast-specific gamma imaging (also called molecular breast imaging) is a diagnostic procedure performed as a follow-up study to a mammogram that detected cancer or was inconclusive in its findings. BSGI is used to detect:

The procedure involves the use of a radiotracer called Technetium-99m-Sestamibi that is injected into the patient’s bloodstream and accumulates in malignant tissue. Images acquired with a special gamma camera modified for breast imaging reveal the distribution of the radiotracer, identifying abnormal areas.

Recent studies have shown that BSGI is able to:

There are also many new and emerging molecular imaging technologies that may benefit breast cancer patients, including: