Breast cancer forms in tissues of the breast—usually in the ducts, tubes that carry milk to the nipple, and lobules, the glands that make milk. It occurs in both men and women, although male breast cancer is rare. According to estimates by the National Cancer Institute, nearly 200,000 people in the United States were diagnosed with breast cancer and more than 40,000 people died from the disease in 2009.

Accurately pinpointing the location of the primary tumor(s) and determining whether the cancer has spread to other parts of the body is critical for determining treatment options for people with breast cancer.

What is molecular imaging and how does it help people with breast cancer?

What molecular imaging technologies are used for breast cancer?

PET involves the use of an imaging device (PET scanner) and a radiotracer that is injected into the patient’s bloodstream. A frequently used PET radiotracer is 18F-fluorodeoxyglucose (FDG), a compound derived from a simple sugar and a small amount of radioactive fluorine. It usually takes between 30 and 60 minutes for the FDG to distribute throughout the body.

Once the FDG radiotracer accumulates in the body’s tissues and organs, its natural decay includes emission of tiny particles called positrons that react with electrons in the body. This reaction, known as annihilation, produces energy in the form of a pair of photons. The patient is placed in a PET scanner, which detects these photons and creates three-dimensional images that show how the FDG is distributed in the area of the body being studied.

Because highly active cancer cells absorb more glucose than normal cells, they appear brighter on PET scans. So, areas where a large amount of FDG accumulates, called ‘hot spots’ because they appear more intense than surrounding tissue, indicate that a high level of chemical activity or metabolism is occurring there. Areas of low metabolic activity appear less intense and are sometimes referred to as ‘cold spots.’ Using these images and the information they provide, physicians are able to evaluate how well organs and tissues are working and to detect abnormalities.

PET-CT is a combination of PET and computed tomography (CT) that produces highly detailed views of the body. The combination of two imaging techniques—called co-registration, fusion imaging or hybrid imaging—allows information from two different types of scans to be viewed in a single set of images. CT imaging uses advanced x-ray equipment and in some cases a contrast-enhancing material to produce three dimensional images. A combined PET-CT study is able to provide detail on both the anatomy and function of organs and tissues. This is accomplished by superimposing the precise location of abnormal metabolic activity (from PET) against the detailed anatomic image (from CT).

Scans are reviewed and interpreted by a qualified imaging professional such as a nuclear medicine physician or radiologist who shares the results with the patient’s health care provider. 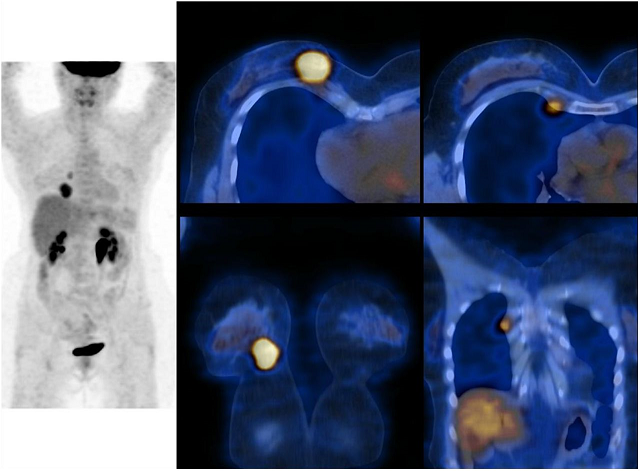 How is PET used for breast cancer?

What are the advantages of PET studies for breast cancer patients?

PET helps physicians and their patients:

What is a sentinel node biopsy and how is it performed?

When breast cancer spreads, cancer cells are often found in the lymph nodes that are located under the arm, called axillary lymph nodes. The lymph nodes in this armpit region drain lymph from the breast and nearby areas. To determine if cancer has spread to a patient’s lymph nodes, an axillary lymph node dissection may be performed in addition to removing part or all of the breast. In a dissection, five to thirty nodes are surgically removed so they may be analyzed in a laboratory for evidence of cancer.

A sentinel node biopsy is a relatively new alternative to the axillary lymph node dissection. Molecular imaging is used to identify the first few or sentinel nodes into which a tumor drains. Sentinel nodes that are closest to the tumor are most likely to contain cancer cells if the tumor has metastasized, or (spread). In a sentinel node biopsy, only the sentinel nodes are surgically removed, which reduces complications and side effects, including lymphedema, for the patient.

Prior to surgery to remove part of or the entire breast, a radiotracer that contains radioactive material is injected near the tumor and/or around the nipple. Images may be taken to visualize the radiotracer’s pathway as it leaves the breast. The physician makes an incision underneath the arm and passes a hand-held probe over the area to measure levels of radioactivity; only the lymph nodes that have absorbed the radiotracer are removed. In less than five percent of sentinel node biopsies, the sentinel node cannot be identified and a full axillary dissection is done.

What are the advantages of sentinel node biopsy?

A sentinel lymph node biopsy is:

A negative sentinel lymph node indicates a greater than 95 percent chance that the remaining lymph nodes are also cancer-free. Most patients resume regular activities within a few days and incisions generally heal within a few weeks.

Breast-specific gamma imaging is a diagnostic procedure performed as a follow-up study to a mammogram that detects cancer or a mammogram that is inconclusive in its findings. BSGI is used to detect:

The procedure involves the use of a radiotracer called Technetium Tc99m Sestamibi that is injected into the patient’s bloodstream and accumulates in malignant tissue. Images acquired with a special gamma camera modified for breast imaging reveal the distribution of the radiotracer, identifying abnormal areas.

What are the advantages of BSGI?

Recent studies have shown that BSGI is able to:

Most PET-CT studies for breast cancer are covered by Medicare and Medicaid. Major insurance companies and health maintenance organizations also provide coverage for PET-CT studies for breast cancer. Patients should check with their insurance companies for specific information on their health plan’s coverage and payment policies.

What is the future of molecular imaging and breast cancer?

There are many new and emerging molecular imaging technologies that may benefit people with breast cancer, including:

What is Positron Emission Mammography (PEM), how does it work, and what are its advantages?

Positron emission mammography (PEM) uses a high-resolution PET scanner designed specifically for breast cancer detection. PEM works much like PET scanning: the patient is injected with a very small amount of a radiotracer such as 18F-fluorodeoxyglucose (FDG), which travels through the body and is absorbed by breast tissue. The breast is then imaged with detectors mounted on compression paddles similar to those used in traditional mammography. Working with a computer, the scanner creates three-dimensional images showing the distribution of the radiotracer in the breast.

What is radioimmunotherapy (RIT)?

In a healthy immune system, certain white cells are able to recognize invading organisms, such as bacteria and viruses. The white cell secretes a protein substance called an antibody that identifies a feature of the foreign (or “invading”) cell called an antigen. The antibody coats the invading cell, which enables other white cells to destroy it. In immunotherapy, scientists create monoclonal antibodies in a laboratory that are designed to recognize and bind to the antigen of a specific cancer cell. In RIT, the monoclonal antibody is paired with a radioactive material. When injected into the patient’s bloodstream, the antibody travels to and binds to the cancer cells, allowing a high dose of radiation to be delivered directly to the tumor.

Several new radioimmunotherapy agents are under development or in clinical trials.