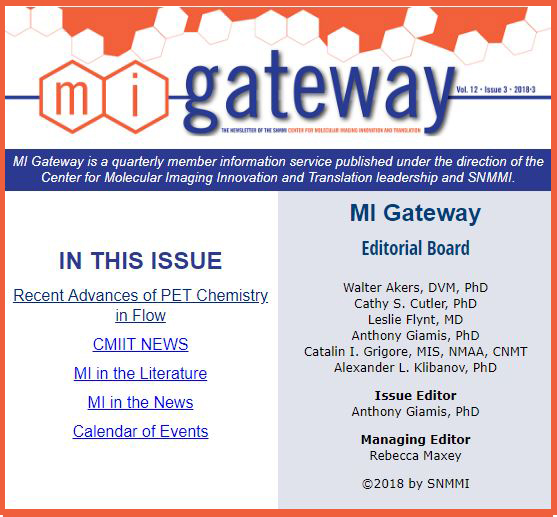 Microfluidics have revolutionized the radiopharmaceuticals field, particularly in both pre-clinical and clinical production of labeled radiotracers. Microfluidics reduce reaction times, consumption of reagents, and the complexity of reaction mixtures while they increase radiochemical yields and optimize reaction parameters for labeling. In short, they allow for the rapid optimization of chemical processes and increase productivity.

The first reported synthesis PET radiotracers in a microfluidic device were published nearly two decades ago and demonstrated that this technology is capable of providing multi-doses of fluorine-18 (18F; t1/2 = 109.7 min) labeled compounds.4 Initially, reactions were limited to simple nucleophilic displacements of tosylates, mesylates and triflates to prepare such compounds as 18F-FDG. However, the choice of substrates now includes fluorodenitration,5 ammonium salts,5 iodonium salts,6-9 halides, etc.

A number of papers and reviews have been published on the use of radiotracers in drug development10-15 and radiotracer production.9,16-34 Continuous-flow microfluidics have exciting advantages over traditional radiochemical synthesis, including low sample and reagent consumption, faster kinetics, high throughput screening of reaction conditions, high reproducibility, easy automation of the processes and enhanced product yields, such as the ability to synthesize materials that cannot be prepared in conventional apparatus due to the rapid degradation of precursor or product under the reaction conditions. Implementation of such a method has significantly accelerated the process of synthesizing labeled compounds and positron emission tomography (PET) radiopharmaceuticals.1, 24 To date, over a hundred radiolabeled compounds have been synthesized in continuous-flow microfluidic devices for PET applications.

Fluoride drying for use in microfluidics

One major consideration of [18F]fluoride is the method used to prepare the fluoride for reaction. A review of the major methods observed that in the microfluidic environment, radiofluorinations can tolerate up to ~5 percent water for a number of precursors and conditions tested in the paper.47

Many reports have shown that there are significant improvements using microfluidics compared to classic reaction methodologies.

It is possible to have an array or matrix of different concentrations and amounts of reagents and run these at different temperatures, monitoring them over time by removing aliquots. The downside of this type of reaction set-up is that each reaction will consume precursors/reagents, and the automated system must be cleaned between each reaction.

Optimization in a microfluidic environment

From a single setup of the system, more than 25 reaction conditions, including temperature, residence time (equivalent to the reaction time), precursor concentration and multistep reactions, may be optimized during these operations.24 This reduces the utilization of reagents, including isotopes, to a minimum and can normally be performed in less than 2 hours. The analysis of the reaction mixture typically is the rate-limiting step.

Autoradiolysis is the degradation of radioactively labeled compounds due to the activity of the labeled compounds and typically increases with activity concentration. Microfluidic devices can be designed to reduce this autoradiolysis by utilizing shapes that exclude the positron interaction, which typically causes the autoradiolysis effects. Rensch et al. noted that about 85 percent of the positron’s kinetic energy is deposited in the first 1 mm and only 13 percent within the first 100 µm.48 Microfluidic synthesis of radiotracers such as [18F]FPEB show no significant reduction in radiochemical yield over the range of activities from 20 mCi or ~45 mCi/mL to 4.5 Ci or >10,000 mCi/mL, using a 100 µm ID reactor.25

Loss of yield when precursor or product degrades at elevated temperature

One such example of this was shown by Philippe et al. in the synthesis of [18F]FE@SNAP (2) (Figure 3).49 The highest radiochemical incorporation yields were found to be zero percent for the vessel-based reaction and ~44 percent for the microfluidic reaction.

In a typical vial/reaction-based system, multistep reactions are performed as discrete steps. For example, the incorporation of the isotope is completed in one step followed by hydrolysis or coupling to a precursor, protein or peptide. In the microfluidic environment, two (or more) steps may be performed in a continuous manner,50-53 such as in the formation of a pendant group, which is later attached to a substrate (either a precursor, a protein or peptide). For example, Cummin et al. demonstrated the microfluidic synthesis of the [18F]F-Py-TFP prosthetic group with radiochemical yields of up to 97 percent and a synthesis time of 3 minutes. This pendant group was then directly transferred to second microfluidic reactor and then coupled to prepare [18F]F-Py-YGGFL (Figure 4). The overall radiochemical yield within 8 minutes, starting from anhydrous [18F]fluoride, was determined to be 28 percent.51

Recently, the combination of microfluidics for the incorporation of the radioisotope and “flow hydrogenation” for the rapid (<3 minutes, using pressures and temperatures of up to 100 bar and 150˚C) reduction or deprotection of PET radiotracers has been shown in the synthesis of [18F]CABS13 (9) (Figure 5).54,55

While the main isotope used with microfluidics has been limited to [18F] fluoride, there has been a recent explosion in the last few years of other useful isotopes.

The next most common isotope used is [11C]carbon and in a number of forms, such as [11C]methyl iodide, [11C]methyl triflate and [11C]carbon monoxide. The reactions performed with [11C]methyl iodide and [11C]methyl triflate include O-methylation,56 N-methylation of amino species,57  S-methylation of thiol species and carbonylation reactions using [11C]carbon monoxide.32,58 Kealey et al. found that the major benefit to using microfluidics, compared to the conventional vial-based systems, was the elimination of unwanted radioactive emissions and the reduction in yield due to the partitioning of the volatile radioactive agent to the headspace during the heating process of a conventional system (Figure 6).58

Most researchers have found that the microfluidic approach generally outperforms conventional radiosynthetic methods when labeling common chelated peptides and proteins. Numerous metals have been used to label proteins, such as 64Cu, 68Ga, 89Zr, 90Y, 99mTc, 111In and 211At. The initial studies were performed using classic silica surfaces, either etched surfaces or silica capillaries. However, there were noted losses related to the binding of some of the metals to a differing level depending on the isotope and the solvents and temperatures being used. Recently, the glass surfaces have been replaced by polymers, such as PEEK59 or poly(dimethylsiloxane) (PDMS)-based microfluidic devices,60 with reductions in the binding of metals to the microfluidic surfaces. It has been noted that increasing the reaction temperature can enhance the reaction rates and improve the incorporation yield. Microfluidics, using peptides, have been performed at temperatures of up to 100˚C without significant reduction in activity of most of the peptides31.

Typically, the purification of the products prepared by microfluidics is performed by classical semi-preparative HPLC, usually followed by solid phase extraction (SPE) reformulations or by using biocompatible HPLC solvents.25,40 There are three main methods of improving purification simplicity – critical for rodent animal study. Typically, 100-200 µCi must be injected in a volume of 100 µl or less because of the low blood volume of the animal. Normal SPE reformulation methods will yield ~10 mLs of a 10 percent ethanol/saline solution but require high starting activities to possess a sufficient radioactive concentration.

The first method is to substitute the HPLC column/SPE reformulation methodology with a simple method using SPE columns to purify the final radiotracer, since microfluidic methodologies generally lead to much cleaner crude reaction mixtures,25 and this allows for a much simpler purification methodology53,61,62.

The second method involves the use of analytical columns instead of the standard semi-prep columns, as well as the replacement of the standard loop with a self-packed trapping cartridge or monolithic column. The solvents used in the purification are normally biocompatible solvents, such as ethanol with water or saline solutions. The product is normally collected in a volume of 0.25-1 mL and because of the higher resolution of analytical columns, impurity peaks may be separated from the product that cannot be removed using classical semi-preparative columns.63,64

The third method is the use of a microfluidic concentration system for the reduction of the total solvent in the solution.65 Chao et al. described a compact microfluidic device based on membrane distillation.66 The system is compact in size and can concentrate the solutions from ~10 mL down to ~1-1.5 mL in ~9-14 minutes. The initial solvents can contain up to 80 percent acetonitrile/water or up to 40 percent ethanol/water.

Further development of microchip fabrication and materials will improve the availability and reduce the cost of individual chips of a more complex design.10,67-73 The proven reduction in radiolysis and expansion of reaction types that are able to be performed in a microfluidic environment, including photochemistry,74 direct use of gases in flow,75 microchip quality control processes,76-78 metabolite analysis79 and the direct measurement of reaction kinetics80 will continue to drive the use of microfluidics. An interesting and expanding area of research is the use of organs on a chip (OC), which has the ability to mimic the response of real organs and has the potential to substitute for animal models, reducing the cost and time required to study radiotracers in controlled microenvironments.68,71,72,81

I would like to thank all of the researchers who have performed pioneering work in the area of microfluidics, which we have built upon, as well as the researchers and collaborators with the vision to look to the future and embrace new technologies for radiotracer development.

AI enables stress-first SPECT MPI protocol
Aunt Minnie
A multi-institutional and multinational research group found that a machine-learning algorithm outperformed visual diagnosis or automated total perfusion deficit analysis for predicting the presence of CAD — including high-risk CAD — without increasing false-positive results. As a result, patients with a normal score from the machine-learning algorithm could safely be discharged and not have to receive rest imaging.

Novel theranostic agent designed for precise tumor diagnosis and therapy
News-Medical
A novel, intelligent theranostic agent for precise tumor diagnosis and therapy has been developed that remains as small molecules while circulating in the bloodstream, can then self-assemble into larger nanostructures in the tumor, and be activated by the tumor microenvironment for therapy guided by photoacoustic imaging.

Novel PET, SPECT techniques help track, modify T cells for immunotherapy
Health Imaging
With PET and SPECT, researchers have demonstrated that T cells can be modified with the DOTA antibody reporter 1 (DAbR1) gene to enable in vivo tracking for immunotherapy.

Nuclear Imaging Moves Toward Digital Detector Technology
Diagnostic and Interventional Cardiology
Nuclear imaging technology for both SPECT and PET have made advancements in the past couple years. The main drivers for this have been a movement to digital imaging detectors to improve image quality and address radiation dose concerns, reimbursement and radiotracer supply issues. Other advancements have come in the areas of software to improve image reconstruction quality, offer better clinical qualification and analytics data.

Laser-sonic scanner aims to replace mammograms for finding breast cancer
Science Daily
Caltech researchers have developed a laser-sonic scanning system, known as photoacoustic computed tomography, or PACT, that can find tumors in as little as 15 seconds by shining pulses of light into the breast.

Scientists develop a new approach for efficient cancer therapy
News-Medical
Two synergistic drug components combined in a dimer within polymeric nanotransporters are activated when the dimer is split within the tumor. High concentrations of the drug are delivered to the tumor with few side effects. In addition, the photosensitizer is a fluorescent dye, and it can bind the radioisotope copper-64, which enables visualization with both fluorescence imaging and PET. Quantitative PET allows for precise monitoring of the dimer, as well as confirmation of its pharmacokinetics and biodistribution in vivo.