﻿PHILADELPHIA (Embargoed until 2 p.m. ET, Sunday, June 24, 2018)—A novel nuclear medicine approach is showing great promise for precision treatment of solid tumors in many types of cancer—including lung, breast, pancreas and ovarian in adults and glioma, neuroblastoma and sarcoma in children. The research was presented today at the SNMMI 2018 Annual Meeting, June 23-26 in Philadelphia.

“Targeted alpha radiotherapy has shown considerable promise for patients, especially for those with advanced castration-resistance prostate cancer,” said Steven M Larson, MD and Sarah M. Cheal, PhD, of the Program in Molecular Pharmacology and Department of Radiology at Memorial Sloan Kettering Cancer Center in New York. “By combining DOTA-PRIT with 225Ac-proteus-DOTA hapten, we can potentially target a wide array of cancer types for which we have validated DOTA-PRIT bispecific antibodies (GD2-expressing, HER2-expressing, and GPA33-expressing cancers).”

DOTA PRIT has a major advantage over other forms of radioimmunotherapy because of its very high ability to deliver radiation to tumors while sparing normal tissues, such as kidney and bone marrow. Larson and Cheal explained, “Creating a targeting alpha radiohapten greatly expands the potential for killing small nests of cells and even single cancer cells, which is likely to be important early in the course of metastatic spread.”

Researchers synthesized proteus-DOTA, radiolabeled it with 225Ac, and conducted in vitro and in vivo studies of a mouse model with colorectal cancer to determine if pretargeting the tumor with 225Ac-proteus-DOTA hapten was feasible. A toxicity study was performed in normal tumor-free athymic nude mice with varying dose levels of 225Ac-proteus-DOTA given as a single intravenous injection. Mice were monitored daily for 145 days post-injection and weighed up to twice weekly for evidence of treatment-induced toxicity.

Researchers found that their new approach, 225Ac-proteus-DOTA, mimics the behavior of the previously developed approach, 177Lu-DOTA-hapten, with high tumor uptake, minimal accumulation in normal tissue, good whole-body clearance, no acute toxicity and no chronic radiation damage (see figure below). In addition, the new approach offers greater versatility of treatment for a wide variety of solid tumors and clinical situations.

Larson and Cheal pointed out, “When solid tumors spread beyond surgical control, they are the deadliest tumors for cancer patients. Using the DOTA-PRIT approach, we hope to greatly expand the potential of delivering precision radioimmunotherapy to human solid tumors.” 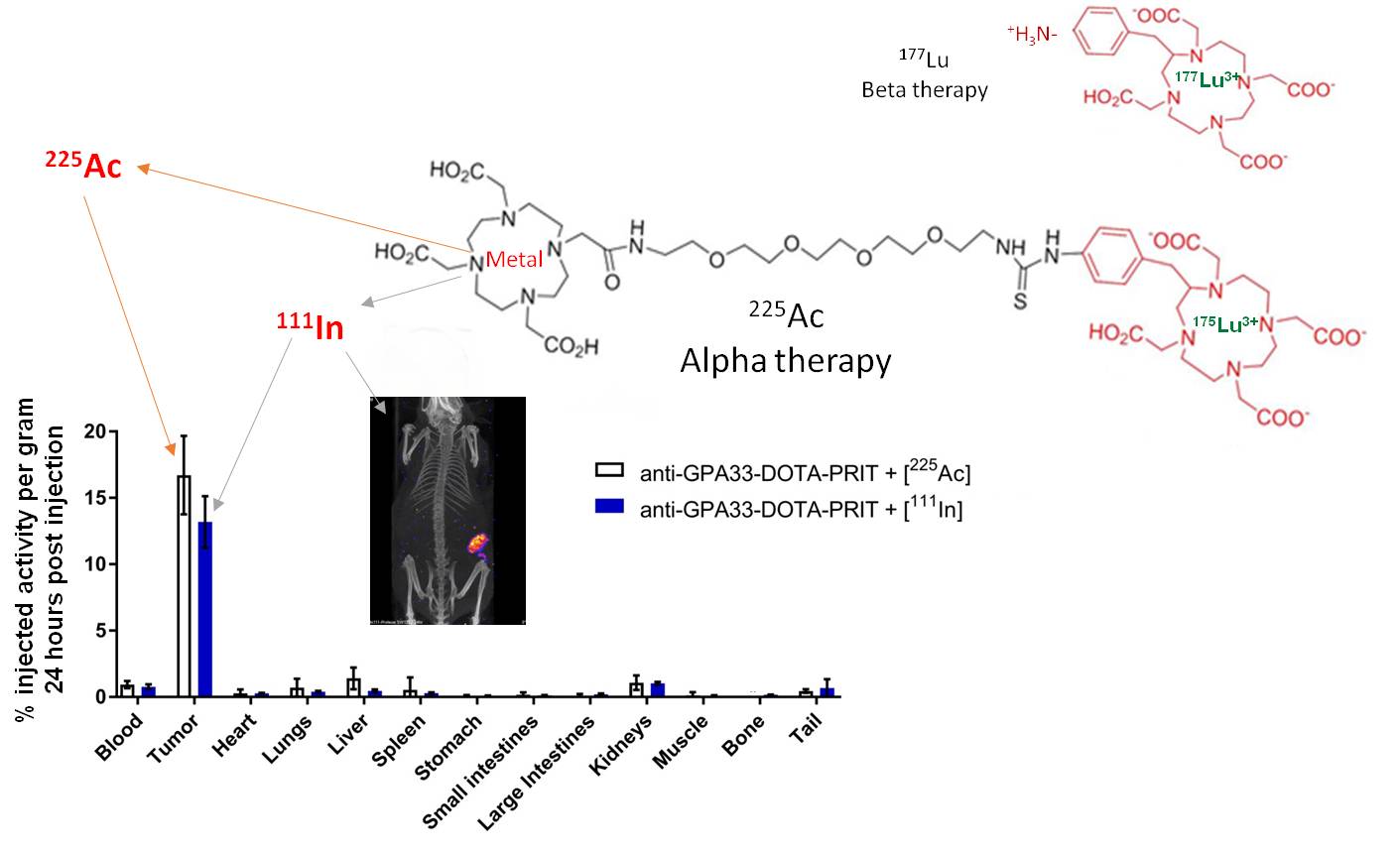 Research support for this study: The Center for Targeted Radioimmunotherapy and Diagnosis, Ludwig Center for Cancer Immunotherapy, Mr. William H. Goodwin and Mrs. Alice Goodwin and the Commonwealth Foundation for Cancer Research and The Experimental Therapeutics Center, MSKCC, Kids Walk for Kids with Cancer NYC, and the Robert Steel Foundation.

Please visit the SNMMI Media Center for more information about molecular imaging and personalized medicine. To schedule an interview with the researchers, please contact Laurie Callahan at (703) 652-6773 or lcallahan@snmmi.org. 2018 SNMMI Annual Meeting abstracts can be found online at http://jnm.snmjournals.org/content/59/supplement_1. Current and past issues of The Journal of Nuclear Medicine are online at http://jnm.snmjournals.org.