RESTON, Va. – In the December featured basic science article in The Journal of Nuclear Medicine, Belgian researchers report on the first large-scale longitudinal imaging study to evaluate BACE1 inhibition with micro-PET in mouse models of Alzheimer’s disease. PET imaging has been established as an excellent identifier of the amyloid plaque and tau tangles that characterize Alzheimer’s disease. Now it is proving to be an effective way to gauge treatment effectiveness.

The tracer makes it possible to image the effects of chronic administration of an inhibitor for an enzyme, called beta (β)-site amyloid precursor protein-cleaving enzyme 1 (BACE1), which cuts off protein fragments that can lead to amyloid-β development and is more prevalent in brains affected by Alzheimer’s. It does this by binding to BACE1.

The study compared control mice with those genetically-altered to have Alzheimer’s, and tested 18F-florbetapir (18F-AV45) along with two other tracers, 18F-FDG PET and 18F-PBR111. The mice received the BACE inhibitor at 7 weeks, then brain metabolism, neuroinflammation and amyloid-β pathology were measured using a micro-PET (μPET) scanner and each of the tracers. Baseline scans were done at 6-7 weeks and follow-up scans at 4,7 and 12 months. 18F-AV45 uptake was measured at 8 and 13 months of age. After the final scans, microscopic studies were performed.

The team of the Molecular Imaging Center Antwerp, Belgium, however warns, “This study clearly showed that accurate quantification of amyloid-beta tracers is critically important and that the non-specific uptake in the brain of subjects might be underestimated for some existing Alzheimer’s tracers that have fast metabolization profiles. The aim of this translational research is advancing results discovered at the bench so that they can be applied to patients at the bedside.”

The statistics on Alzheimer’s are sobering. Approximately 10 percent of people 65 and older have Alzheimer's dementia, according to the Alzheimer’s Association. More than 5 million Americans are living with the disease, and that number could rise to 16 million by 2050. 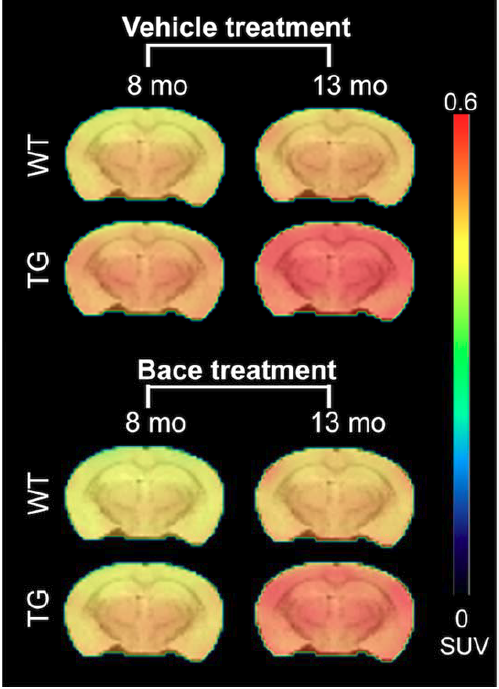 The research positions of some of the study authors were funded by Antwerp University and University Hospital, Antwerp. An Agency for Innovation by Science and Technology (IWT) scholarship also helped support the study.

Please visit the SNMMI Media Center to view the PDF of the study, including images, and more information about molecular imaging and personalized medicine. To schedule an interview with the researchers, please contact Laurie Callahan at (703) 652-6773 or lcallahan@snmmi.org. Current and past issues of The Journal of Nuclear Medicine can be found online at http://jnm.snmjournals.org.